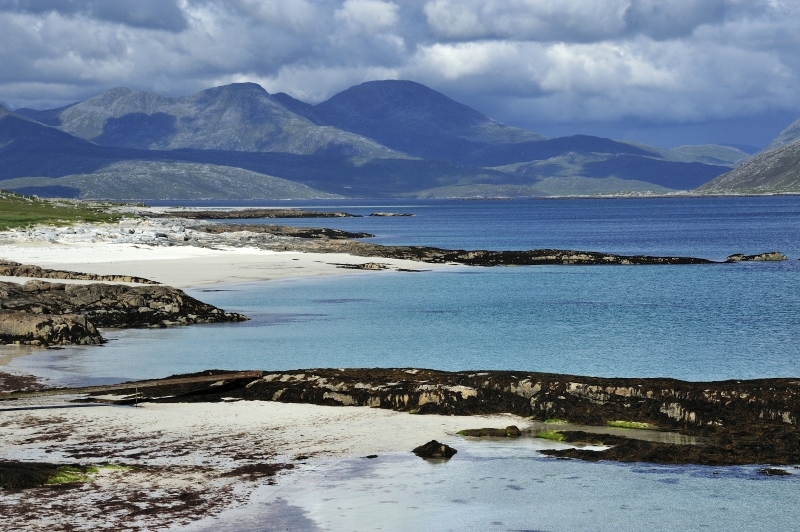 This small gem of an island, just off the west coast of Harris, is a recent discovery for me. Due to the absence of a ferry I was never able to set foot there.  However, I recently managed a visit accompanied by the island's owner.

I had seen images of the island on the TV series 'Castaway', but was not prepared for its beauty or tranquility. It is stunning with fabulous views in all directions, enhanced that day by the clarity of light. During the few hours ashore I explored as much as I could, still only covering a fraction of the place. There were huge wind-sculpted sand dunes, old walls running up hillsides, burns, a lochan, cairns and an ancient graveyard down by the sea. Added to this, was a herd of red deer and a flock of sheep which roamed all over. It was a visual treasure trove.

As we were about to leave, the owner recounted a strange experience he once had by the graveyard when accompanied by his children and a couple of estate workers. The workers were at work on the buildings while the children took off to explore the hill. The owner had noticed one of the women's graves by the sea was becoming exposed and was vulnerable to being washed away in the next storm. He asked the workers to try and re-instate it. With the aid of a digger, they built it up with boulders and sand. This achieved, the workers disappeared to renovate some walls, whilst the children left the beach to explore.

The owner, left there on his own, was making a mobile phone call when he became aware of a young girl singing. He initially thought it was one of his daughters nearby, until he realised this beautiful voice was singing in gaelic, so it couldn't possibly be. After a few minutes it stopped, and the only semi-plausible explanation he could think of was that it was the occupier of the grave saying ‘Thanks!'