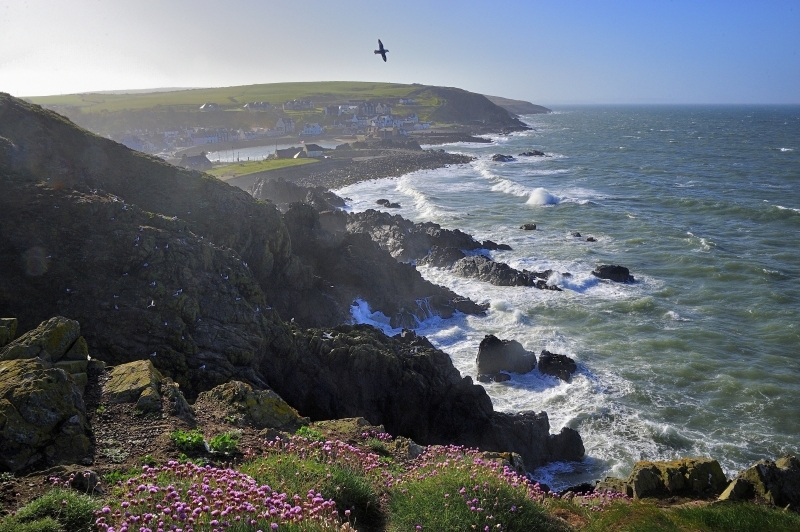 Located far from the popular Scottish tourist routes, Portpatrick nestles on the Western Galloway coast, from where on a clear day you can see Ireland. Its rugged coastline, hewn out by the power of nature, regularly experiences severe winter storms, and historically many ships have been  wrecked on these shores. On a cheerier note, it now boasts being the starting point for the Southern Upland Way, which goes all the way to Berwick upon Tweed in the East.

I took this image early one morning in May, having headed out on the Southern Upland Way for a pre-breakfast stroll. Although the first part of the route sticks mainly to the coastline, it goes uphill and downhill constantly. It is very stimulating visually, and at that time of year the pathway was straddled with a multitude of plant life - vivid sea pinks and bluebells, contrasting with occasional glimpses of the grey cliffs.  Never very far away were all manner of sea birds, whooshing past, and sounding a cacophony of calls as they busied themselves for nesting time. It was electric.

In spite of all the visual stimuli, the highlight of the walk was being accompanied by a very friendly collie dog. He was lying in wait at the beginning of the trail, and kept up with me for a couple of miles over the cliffs, and then all the way back to our meeting point. I left him lying there eagerly awaiting another traveller. When almost back into town, I discovered a rather precarious walkway out over the cliffs. It was from there I got my picture, whilst dodging the dive-bombing fulmars and kittiwakes